If you’ve grown up in the current era where everything you own is disposable, downloadable or rechargeable, you won’t only not get this, you’ll probably hate it. But believe it or not, there was once life before mobiles, apps, and the culture of instant ‘everything’. So unless you want a little history lesson, kindly hand this paper over to a nearby Gen-Xer or Baby Boomer now…

Yes OK, I admit it, I am a collector. A literally dying breed in an age ruled by the cycle of middle-class mass consumerism, where desire is naturally followed by accumulation, obsolescence and replacement. As each of my kind disappear, the remainder descend to scoop up the collection that is left behind, and so on, until all those unwanted badges, buttons, stamps, swap-cards and matchboxes eventually just turn to dust like their previous owners.

So why do I keep all that stuff and throw it in a shoe box or an old tin? Well, let me first give you an insight into the psychology of the collector. 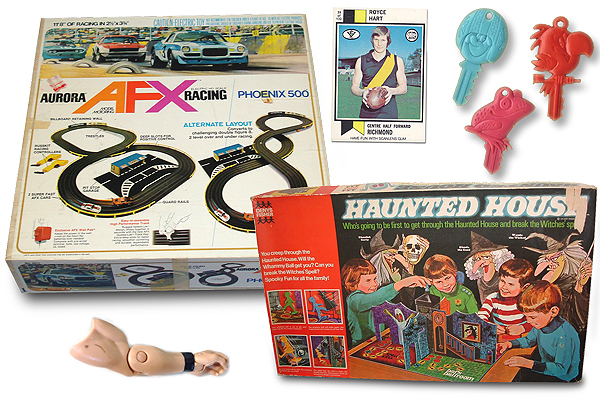 Collecting as a hobby was as much about the times as it was the person. Just like you see in those ‘remember’ memes your parents share on Facebook reminiscing about black and white TV, Viewmasters, and playing cards wedged into the spokes of their dragsters, it was a time when you didn’t buy anything new but when you did, from clothes to cars, they lasted, whether you liked it or not. And if you were unlucky enough to lose it, break it or have it confiscated by the school bully? Too bad, nothing was replaced with any great urgency, you simply waited until your parents could afford another one, or maybe until your next birthday, or when you qualified for a hand-me-down from an older sibling or cousin.

We collected not just because our minds and fingers needed to touch, sort and catalogue, but because ownership meant power – power over our own belongings – which was the only power a child had in those days. They were not asked their opinions, did not always sit with the adults at mealtimes, and outings were either to the footy, Grandma’s, or stifled by the silence and boredom of the dreaded ‘Sunday drive’ – rarely to a destination of the child’s choice.

By collecting we slowly added to the small number of things we could control in our lives. A lucky child might have a few books, a couple of board games, some action figures or dolls, enough clothes to get them through the year (and maybe next) and a few other core toys – a random box of Lego, matchbox cars, or perhaps even a Hornby train or Scalextric racing car set. The privileged child with a parent who had the time to be thoughtful or encouraging (and the money to follow through)  might also own either a musical instrument, or perhaps even an art, chemistry or Meccano set to draw out any creative or technical natural abilities that could become useful later in life.

And that was it. Sounds depressing doesn’t it? These belongings were added to the inventory of our existence gradually over the years at intervals such as Christmas’s or birthdays, but rarely subtracted from – apart from the oh-so gracious gifting of a broken Barbie doll or Stretch Armstrong to a younger brother or sister (which was duly accepted with gratitude and awe).

That left only the things that came for free (premiums) in cereal and bread packets, or from the Milk Bar as the “free agents’, the bonus belongings that could be obtained depending on your pocket money situation, or status in the household pecking order. The effort that went into acquiring these extras – both physical and strategic – made modern reality TV shows look like Play School.

Firstly, your mum had to be tricked into buying the cereal with the ‘must have’ accessory, like plastic circus animals or key rings. Methods have not changed over the decades in this department, convincing a parent that it was their idea in the first place – and a damn fine idea at that – has always been the key to success. Unlike today, cereal choices didn’t have to be healthy, but it helped if they was on special, which Corn Flakes and Rice Bubbles – the leaders in the marketing and distribution of cereal toys to the kids of Australia – often were.

Next you had to be the one who opened the new packet. Apart from keeping a mental register of the kitchen pantry’s contents, and possibly a stake-out, it often meant stuffing down A LOT of cereal in one session, perhaps even three bowls worth if it meant finishing off the old packet before anyone else cottoned on to your scheme.

Finally, when the new one was opened, I can tell you from experience it really, really helped being the biggest and strongest kid. Unless there was a parent nearby to hear the inevitable cries of injustice, you were the king of the kitchen battles and the distribution of the spoils was non-negotiable.

Fortunately for all there were times when items could be procured in simpler fashion by wandering down to the local Milk Bar, running the gauntlet of stray dogs, elderly neighbours scouring the street for slave labour, and BMX bandits. Lollies weren’t really my thing, besides the fact that they were gone pretty quickly and you had nothing to show for your 5 cents, they stuck to your teeth – an alarming situation when coupled with the standard of post-war dentistry and our pre-fluoride water supply. No, footy cards were my pre-adolescent vice; rip open the pack, slam the gum in your mouth and chuck the wrapper on the ground. The first thing I’d tell myself if I could send a message back to the ’70’s (apart from ‘buy property’)? Keep the wrappers! They fetch up to $500 on ebay these days. If nothing else, I guess that proves there actually are other collectors out there still.

So next time you’re about to upgrade your iPhone, or buy a new game-console, think for a moment about how good they might look on a shelf or in a glass display cabinet alongside other past remnants of your device-driven life, and maybe – just maybe – you might see the value in starting your own 21st century collection…

My top 5 collector items (past and present)