When I was a kid growing up in the 1970’s version of Melbourne’s Eastern Suburbs, you either barracked for the Tigers, or “someone else” – a collective of rabble teams, lower than the mud caked on the underside of our moulded-stud footy boots.

Yes it was real Tiger heartland, emphasised by the parade of stars who visited our school each year to conduct footy clinics – Kevin Sheedy, Bruce Monteith and Noel Carter to name a few.

My Richmond jumper and I went everywhere – through the local orchards after school, to the milk bar to spend my 50 cents of pocket money on footy cards, and up and down every street in my neighbourhood, hoping to catch a glimpse of one of my school mates, primed for a late afternoon kick of the footy.

My school photos tell a familiar story – standing at the back, Richmond jumper freshly washed for the event (we didn’t have a school uniform) arms proudly crossed. My greatest disappointment was in 1977, when the school photographer chastised me – “Hey Richmond jumper at the back – uncross those arms, its not a football team photo!”. (See photo!)

How sweet was my revenge the following year – I wore short sleeves and they couldn’t stop me!

But I learned the harsh lesson early that skill would only take you so far, and as I possessed neither the passion for hard work, nor the guts for the contest, my dream petered out by under 15 level. Would I have done things differently had I known? Maybe.

Nothing like the effort that will be required for those affected by Bushfires to rebuild their lives and communities in the coming years.

And I sure felt old, sitting with a bunch of young guys having a laugh, patiently holding the same position for 2 hours in the sun, but there’s a real buzz around Punt Road in 2009 – everyone has it, from the coach down to the bootstudder – a feeling that something good is going to happen this year. I feel it too.

So it’s a pleasure being able to share this photo, and a very proud moment with CT junior, who hopefully will not only come to grasp the honour of being able to take part in this event, but will also process the importance of helping when it’s needed. 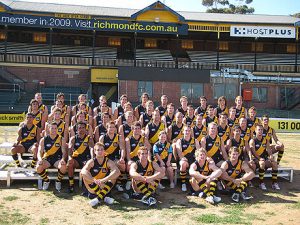 This week has brought back those memories, as I finally got to take up my position in the second row of the mighty Tiger’s team photo. Albeit under different circumstances – I had fancied my chances of taking the glamour route from the Glen Waverly Hawks, through Essex Heights (unofficial under 15s), to the Richmond Under 19’s and so on…