So many collectables, so many years

Where do you start to understand what you have? Thousands of different posters, stickers, bottle caps, badges and postcards were all issued – along with the popular cards – for many sports such as football, Rugby League, cricket, horse-racing, tennis, athletics etc, as well as non-sport trade cards for TV shows like Kung Fu and Planet of the Apes, and all manner of other subjects from dogs to airplanes.

We have listed some Victorian Football League card series here to give you an idea of the main issues and the era they come from.

Other companies saw the benefit of including cards with their products, and they started to appear in chocolates, sweets, cakes, and as grocery store give-aways. Common manufacturers and issuers were Hoadleys Chocolates, Allen’s sweets, MacRobertson’s, McIntyre Bros, Suburban Premiums, Griffiths Black Crows, Thorp’s, Pals Periodical Magazine, Craig & Hales Confectionary, Clarke-Ellis Confectionary. Often collected by children (and mishandled) these are some of the rarer series. Some examples:

A period that provided some of the most easily found series, due to the fact that so many people smoked, yet no one was in the habit of throwing things away, these have therefore survived the decades since in large quantities. Common manufacturers and issuers were W.D. & H.O. Wills, Godfrey Phillips (BDV), Carreras Tobacco, Turf, Giant Brand. Some examples: 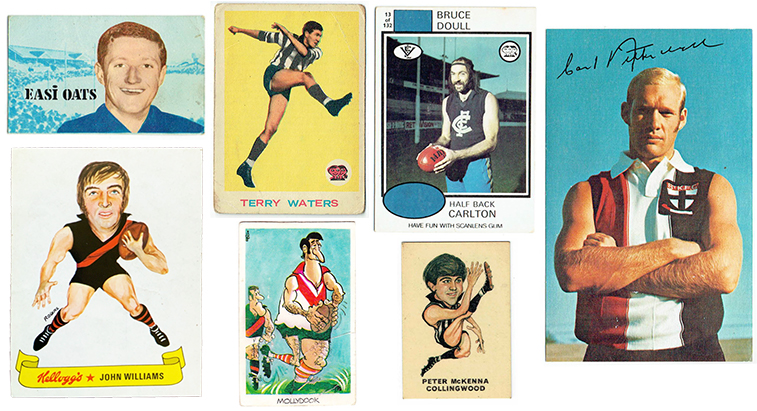 Cards were becoming big business in the USA, and companies without any service or an accompanying product like gum or cereal set out to cash in on the boom by creating large card series and labelling them “collectables”. Common manufacturers and issuers were Select, Regina, Stimorol, Teamcoach and newspapers in different states.
(Note – unfortunately due to production of mass quantities we cannot help you with these collections)

Hopefully this will help you answer the questions – “What cards do I have?”