As anyone who collects Scanlens VFL cards would know, there is one card that stands out in the 1963 “Holy Grail” set – # 12 Graham “Polly” Farmer.

I have spoken to many collectors who are seeking that one card, which raises the question”Why are there so few of Polly when compared to the other 17 cards in the set?”

Well, I believe the answer is to be found in another card – Footscray’s Brownlow winning ruckman, #6 John Schultz.

I have seen a few of this card over the years, and almost every one has a one inch long imprint on the right hand side border, showing on both front and rear of the card, the likely source being somewhere in the production process – possibly a grip or clamp in the guillotining stage.

So the new theory is this – if the John Schultz card was damaged 3 out of 4 times in the production process, is it not possible that the Polly Farmer card was also damaged 3 out of 4 times, however, unlike the Schultz card, the damage was more severe – severe enough for the quality control at Scanlens to discard hundreds of Polly Farmers before they reached the packet.

Only someone who worked at the printers in the early 60’s could possibly know the answer, or possibly Mr Scanlen himself.

In the meantime, here’s an image of that famous, elusive card. 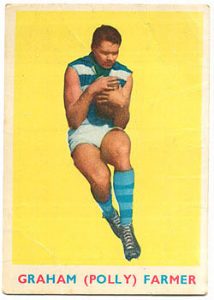